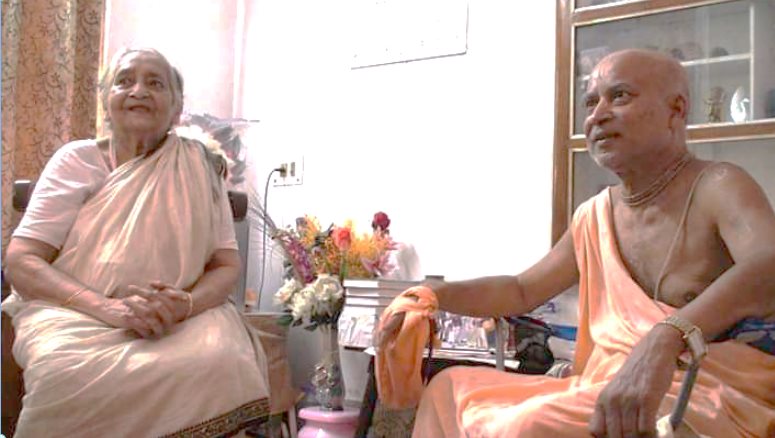 On the auspicious occasion of Putrada Ekadashi (7th January, 2020), our most beloved ‘Thakur Maa’, mother of HH Subhag Swami, eternally entered the kingdom of the Lord. She left this world with a peaceful smile. The devotees gathered at that time described the instance and narrated her pastimes. They were astonished to witness the departure of a pure soul. HH Subhag Swami also visited and spoke to her. Thakur Maa was born in a very rich aristocratic family of Bengal (The Bhagyakul Roy Family also known as The Roys of Bhagyakul) in a place called Bhagyakul (near Dhaka, Bangladesh) in undivided Bengal, now in Munshiganj district of Bangladesh. A devotee recalled the first darshan of Thakur Maa, “She had light golden complexion, curly bob hair and her face was shining. She wore golden bangles whose color mixed with her hands.”

Thakur Maa had eight siblings and her father was a very rich salt businessman of Bengal. She was the eldest child and her parents gave her a lot of care and attention during childhood. She was married at an early age to Shri Vinay Kumar Talukdar (Maharaja’s father) and then also she got a lot of love and care. Her father-in-law, Shri Rasik Chandra Talukdar, always used to eat food cooked by her. Thakur Maa once said, “My father-in-law ate only when I served him lovingly.”

She was an expert in cooking many Bengali items. As she was born in a rich and pious family, from her childhood she used to visit many holy places with her parents who told her about the Lord and His pastimes in various tirthas. She was a devotee of the Lord from her childhood and she instilled the same values to Maharaja. She told Maharaja about the Lord, accompanied him to visit local temples, generally RamKrishna Mission, and used to practice all rituals especially the Ekadashi Vrata.

Thakur Maa used to tell the devotees that their Guru Maharaja came from Vrindavan although he was born in Kolkata and the devotees were always puzzled about this secret until once she narrated the following incident when her father had organized a feast for the sadhus. Thakur Maa’s family used to visit Shri Vrindavan Dhama regularly and served the sadhus there. Her father had a temple in Vrindavan, now renamed Mira Bai Temple, and there he used to serve sadhus. One day while her parents were serving sadhus, one of the sadhus looked at Thakur Maa enquired who this lady was, to which her father replied that she was his daughter. The sadhu then said that she is a very nice lady and also very lucky because one of her child will be the deliverer of many conditioned souls. This was naturally confusing for her parents and thinking that she had misheard, Thakur Maa’s mother replied, “Yes, she sleeps a lot and also doesn’t take much food these days”. Thakur Maa was observing this and after the feast she asked her father about the sadhu’s enquiry. So her father told her how the sadhu predicted that she will beget a child who will deliver many conditioned souls. Hearing this prophecy, Thakur Maa became shy and ran away. After consulting the doctor it was confirmed that she had conceived a child. Thakur Maa told devotees that she knew already that this child will not stay with her.

She said, “You are now seeing that your Guru Maharaja is very silent and shy but he was not like this always. In his childhood days, he used to play in the Ganges and do much mischief, crossing from one side to another.” Many times Thakur Maa would get angry with him for spending so much time in playing with friends and used to shout on him to stop playing and return back early, but Maharaja did not.

Maharaja loves his mother very much and always asked his disciples about her well-being. When devotees came from Vrindavan, Maharaja asked what they had brought from Vrindavan for Thakur Maa. Sometimes, Maharaja personally said to give something for Thakur Maa. When Maharaja was in a foreign country, he bought a muffler for Thakur Maa which she received from the devotees and became greatly pleased and satisfied. Many times devotees also used to bring gifts for her.

A devotee bought a pair of socks for her once. She asked what was put on her feet that made her feel so warm. Upon realizing that it was a pair of socks, she said that she can’t wear it because she has to work in the kitchen. The devotee requested, “Thakur Maa your legs are very cold” to which Thakur Maa said, ‘Ok, I will wear it sometimes.”

Once on Maharaja’s Vyas puja, Thakur Maa came to Shri Mayapur Dham to grace the occasion and took part in the celebrations in Shri Mayapur Chandrodaya Mandir. Thakur Maa was very happy and everybody was also very happy to serve her. She took prasadam and was very happy during the celebration. Many times, Maharaja was busy and couldn’t give time to Thakur Maa. On one such occasion, Thakur Maa became anxious and told devotees that she wanted to meet her son and requested the devotees to tell Maharaja to meet her, which they did. When she met Maharaja, she became very emotional and held Maharaja tightly, speaking, “You are ok! You are ok! You are ok!” The devotees also started crying by witnessing so much love between them. Next day, Maharaja was going to Singapore and while going to airport, Maharaja asked Thakur Maa if she wanted to buy something from the mall but Thakur Maa was unwilling to buy anything.

Thakur Maa also love devotees a lot. One day Maharaja took devotees for a boat ride with Thakur Maa and suddenly rain started and he told devotees to come inside the shed in the boat. Then Thakur Maa used to tell everybody to come safely, take care of yourself, and be careful one day. She was so caring and loving to everyone.

Thakur Maa loved devotees a lot. One day Maharaja took devotees for a boat ride with Thakur Maa and suddenly it started to rain and he told devotees to come inside the shed in the boat. Thakur Maa told everybody to come in safely, take care of themselves, and be careful. She was so caring and loving to everyone.

Srila Prabhupada asked Thakur Maa, “How many children do you have?” She told, “I have seven children”. Then Srila Prabhupada said, “Thakur Maa you are a tree and you have seven flowers. I am asking you to give me one flower for offering to the Lord at His Lotus feet”. To this, Thakur Maa said, “Ok I have given you one flower to offer to the lotus feet of the Lord, happily”.

Thakur Maa told the devotees that during her marriage, her mother gave her a lot of gold, diamond and pearls. Devotees asked her that what she did with the ornaments? She said, “I distributed it all among my daughters-in-law”. Devotee asked, “Why did you not give anything to Maharaja?” Thakur Maa told them that their Guru Maharaja didn’t want these things and that she gave him Krishna and these things are useless for him now.

her brothers and decide what to do and he was a sanyasi and can’t tell everything. Day by day, she got older (she was 99). After a few days, she was again admitted to the hospital. Devotees visited the hospital and Thakur Maa asked devotees what they had brought for her. Devotees told her that they brought Sandesh and she said, “Please serve me Sandesh. They are not giving anything. They are passing food through the pipe.” Devotees said, “Thakur Maa, Maharaja sent caranamrita  (Deity bathing water made sweet) for you, please take it.” Next day, Maharaja came to meet her and told a devotee that he will serve her Sandesh, then he should give caranamrita to her. Thakur Maa came back home but due to cold weather, her condition deteriorated further and due to extreme old age, many problems arose.

On the auspicious occasion of Shri Putrada Ekadashi, Pausa Masa (Shukla) at 4:03 am (Amrita Yoga) Thakur Maa left this world with a peaceful smile on her face. Devotees brought garlands and chandan of Shri Narasinghadev.

Maharaja was informed and was glad to hear she left this world at an auspicious time. Maharaja said that after Srila Prabhupada, if somebody is very dear to him, it is Thakur Maa and that she was a pure devotee.